This is a repost from wikipedia, please look at the “Philips” family and notice that Bill Gates is a part of this elite club through that family. Also noticed that the Warren family is listed here which is the same last name as Elizabeth Warren who lives in the same area.

From Wikipedia, the free encyclopedia

Jump to navigation Jump to search

Colonial Boston— the Boston Common in 1768

The Boston Brahmins or Boston elite are members of Boston‘s traditional upper class.[1] They are often associated with Harvard University; Anglicanism; upper-class clubs such as the Somerset in Boston, the Knickerbocker in New York City, the Metropolitan in Washington, D.C., and the Pacific-Union Club in San Francisco; and traditional Anglo-American customs and clothing. Descendants of the earliest English colonists are typically considered to be the most representative of the Boston Brahmins.[2][3] They are considered White Anglo-Saxon Protestants.

The doctor and writer Oliver Wendell Holmes, Sr. coined the term “Brahmin Caste of New England” in an 1860 story in The Atlantic Monthly.[4] The term Brahmin refers to the highest-ranking caste of people in the traditional Hindu caste system in India. By extension, it was applied in the United States to the old wealthy New England families of British Protestant origin that became influential in the development of American institutions and culture. The influence of the old gentry is has reduced modern times, but some vestiges remain, primarily in the institutions and the ideals that they championed in their heyday.[5] 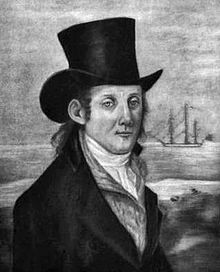 Typical dress of the Boston elite[when?]

The nature of the Brahmins is hinted at by the doggerel “Boston Toast” by Holy Cross alumnus John Collins Bossidy:

And this is good old Boston,
The home of the bean and the cod,
Where the Lowells talk only to Cabots,
And the Cabots talk only to God.[6][7]

While some 19th-century Brahmin families of large fortune were of bourgeois origin, still fewer were of a somewhat aristocratic origin. The new families were often the first to seek, in typically British fashion, suitable marriage alliances with those old aristocratic New England families that were descended from landowners in England to elevate and cement their social standing. The Winthrops, Dudleys, Saltonstalls, Winslows, and Lymans (descended from English magistrates, gentry, and aristocracy) were, by and large, happy with this arrangement. All of Boston’s “Brahmin elite”, therefore, maintained the received culture of the old English gentry, including cultivating the personal excellence that they imagined maintained the distinction between gentlemen and freemen, and between ladies and women. They saw it as their duty to maintain what they defined as high standards of excellence, duty, and restraint. Cultivated, urbane, and dignified, a Boston Brahmin was supposed to be the very essence of enlightened aristocracy.[8][9] The ideal Brahmin was not only wealthy, but displayed what was considered suitable personal virtues and character traits.

The Brahmin was expected to maintain the customary English reserve in his dress, manner, and deportment, cultivate the arts, support charities such as hospitals and colleges, and assume the role of community leader.[10]:14 Although the ideal called on him to transcend commonplace business values, in practice many found the thrill of economic success quite attractive. The Brahmins warned each other against avarice and insisted upon personal responsibility. Scandal and divorce were unacceptable. The total system[clarification needed] was buttressed by the strong extended family ties present in Boston society. Young men attended the same prep schools, colleges, and private clubs,[11] and heirs married heiresses. Family not only served as an economic asset, but also as a means of moral restraint. Most belonged to the Unitarian or Episcopal churches, although some were Congregationalists or Methodists. Politically they were successively Federalists, Whigs, and Republicans. They were marked by their manners and once distinctive elocution. Their distinctive Anglo-American manner of dress has been much imitated and is the foundation of the style now informally known as preppy. Many of the Brahmin families trace their ancestry back to the original 17th- and 18th-century colonial ruling class consisting of Massachusetts governors and magistrates, Harvard presidents, distinguished clergy, and fellows of the Royal Society of London (a leading scientific body), while others entered New England aristocratic society during the 19th century with their profits from commerce and trade, often marrying into established Brahmin families.[12]

About the Author: Jonah Krosse

Jonah Krosse is a Professional Drummer, MWC Emcee, MWC Journalist and Talk Show Personality at RhymeBomb.Live. RhymeBomb is a New Genre designed by OG emcees to replace the labels "hip hop" and "rap". Rhyme Bomb Genre was created by Dr. Max Stone and The Radical Guessworks. Jonah Krosse has appeared on Dr. Max Stone's "The Compound Show" as well as some live freestyle cyphers broadcast on spydernet.live. Jonah Krosse is a regular contributor to Mental Wakeup's Research Library.